How some bands have branding down to a tee… 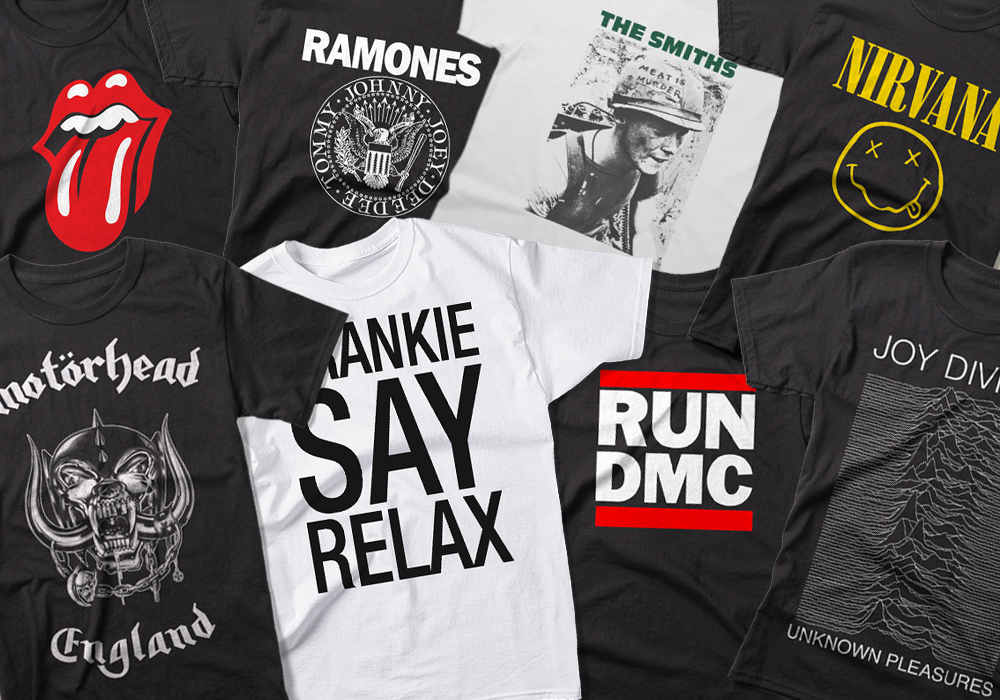 When it comes to creating brands – the music industry has always been way ahead of the curve. Bands reinforce their music with a strong visual aesthetic – through album artwork, the way they dress, their hairstyles and even logos – brand identities created to be a visual representation of the music, outlook, and attitude of the band – and of course, to sell merch.

Wearing their favourite bands t-shirt allows fans to feel as if they were both connected to the artist and part of something much bigger – a ‘gang’, ‘tribe’ or community of like-minded people who shared their aesthetics, values, and musical taste.

There’s no doubt about it, there are some bloody awful band t-shirts out there (yes Cradle of Filth, I’m talking to you) – but sometimes, for one reason or another, a t-shirt takes on a life of its own – transcending the band they originally represented to become powerful cultural signifiers of a specific time and place in history, and much more… 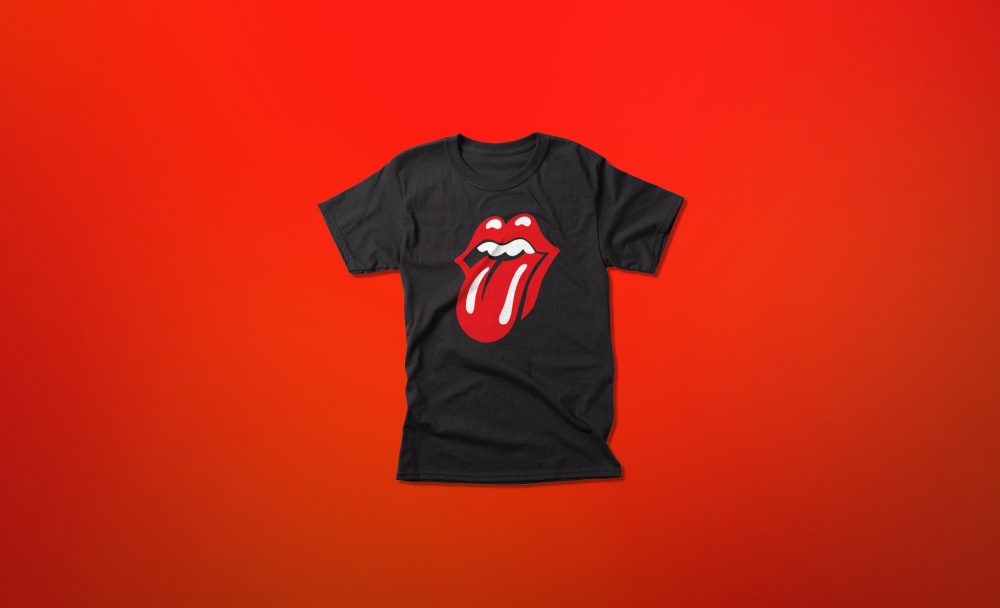 The Rolling Stones – Lips T-shirt
Let’s start with the undisputed king of rock ’n’ roll iconography, the Stones’ iconic ‘Lips’ Logo. Created in 1971 by London artist John Pasche, it first appeared on the Stones’ album, Sticky Fingers – but who remembers that?

The Ramones – Presidential Seal T-shirt
Designed by New York artist and longtime friend of the band Arturo Vega, this is a great example of the brand transcending the band – worn by people who have never even heard of the Ramones and have zero interest in punk rock. – Why? Because they’re just so damn cool! 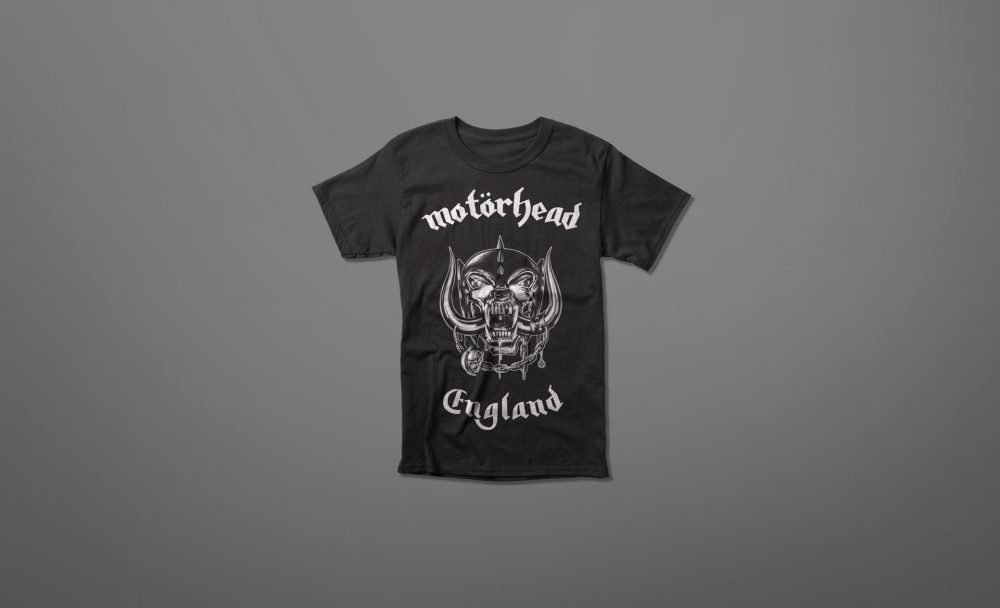 Motörhead – Motörhead England T-shirt
When legendary frontman Lemmy approached him with the task of designing a logo for the band, artist Joe Petagno created a terrifying hybrid beast, part dog, part gorilla, part boar, and all badass. Lemmy’s idea was for Snaggletooth (as he was named) to become a symbol that unites those who wear it: a uniquely feral, badass biker patch found on jackets and t-shirts, an amazingly powerful example of a perfect brand. 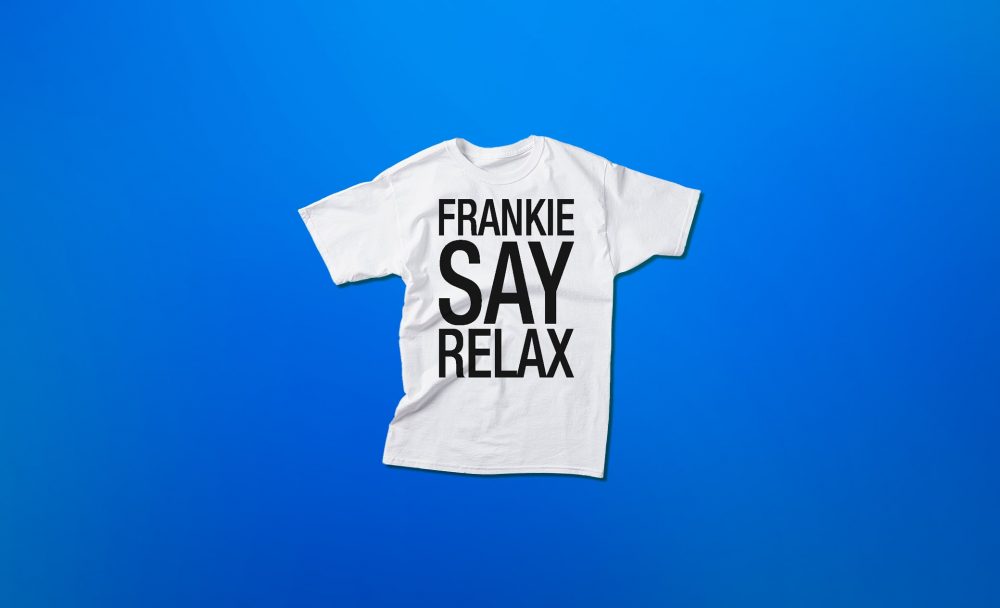 Frankie Goes To Hollywood – Frankie Says… T-shirt
When 80s phenomenon Frankie Goes To Hollywood scandalised radio 1 with their first single “Relax’ that they banned it – and doing so, made it a huge hit! The t-shirts were a huge part of the bands’ domination of popular culture in 1983/84. ”I wanted to put a really large message on T-shirts that could be read from 20 or 30ft away,” said fashion designer Katherine Hamnett of the t-shirts that came to represent the 80s. “Slogans work on so many different levels… they’re a way of people aligning themselves to a cause. They’re tribal. Wearing one is like branding yourself” – mmmm… 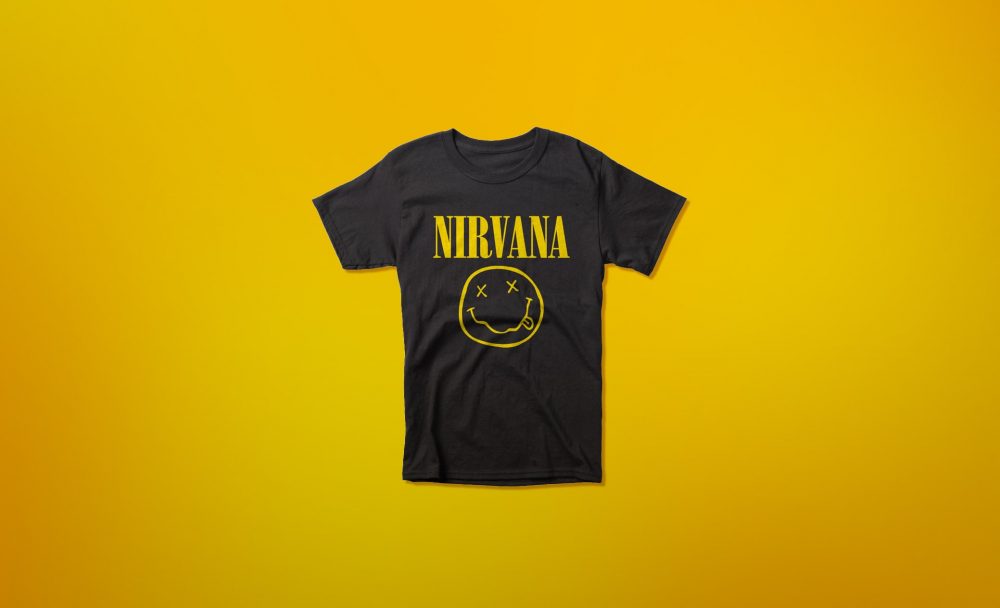 Nirvana – Smiley Face T-shirt
Rumour has it that the late Nirvana singer, Kurt Cobain himself drew the logo as an uncharitable portrait of Axl Rose on his apartment wall one night. Personally – I think it’s just a canny subversion of the acid house smiley beloved of clubbers back in the day. 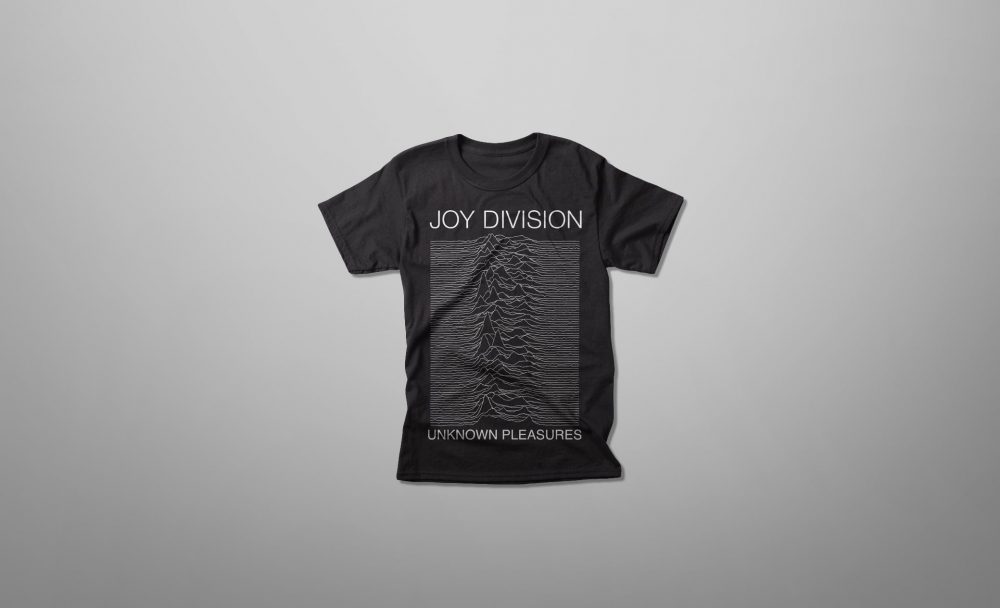 Joy Division – Unknown Pleasures T-shirt
Design Titan Peter Saville was 22 years old when he created this stark, monochrome image for Joy Division’s morose 1979 masterpiece “Unknown Pleasures.” A diagram of a series of pulse waves, the original cover has neither band name nor album title printed on it – you had to be in the know to even understand what it was – genius. 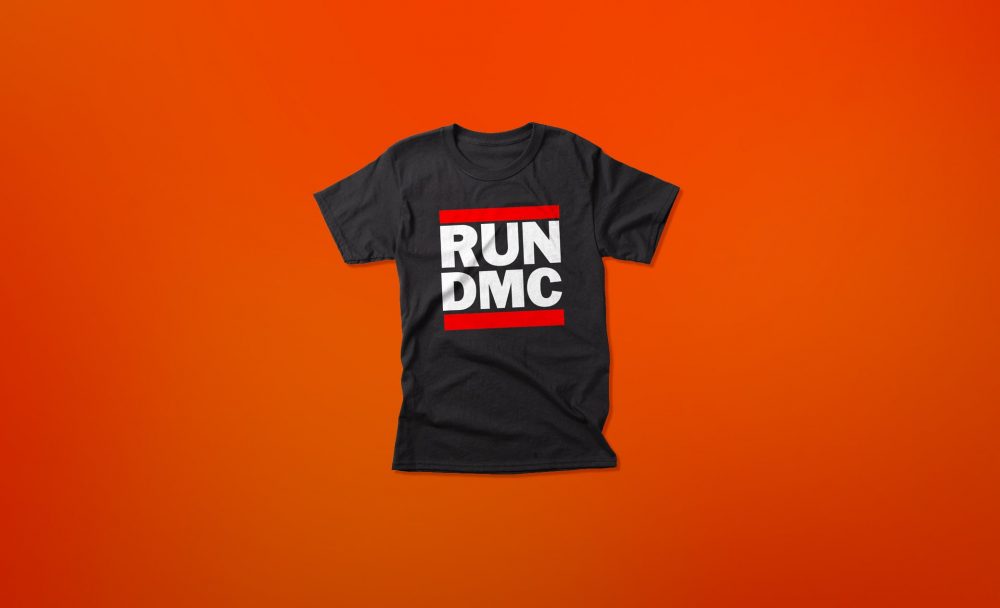 Run DMC – Logo T-shirt
Founded in 1981 in Hollis, Queens, New York, by DJ Run, DMC, and Jam Master Jay, Run-DMC was one of the first rap acts to break into the mainstream. Designed by Stephanie Nash, then part of record label Columbia’s in-house design team, the Run DMC logo reaches Zeitgeist levels of instant recall. Like the thick chains worn by the group, the image recalls one of hip hop’s most influential groups with strong, punchy simplicity. 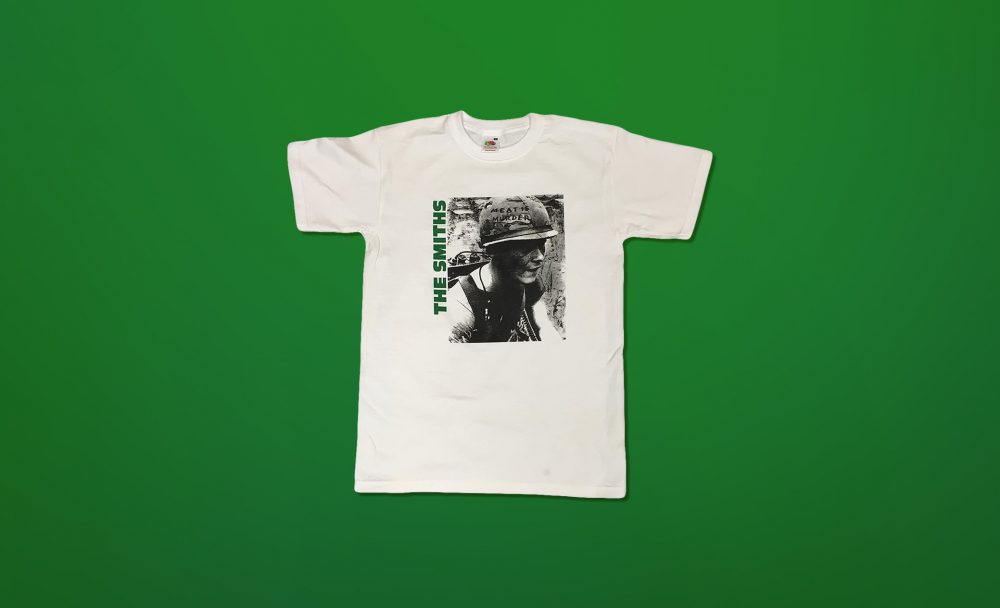 The Smiths – Meat is Murder T-shirt
Another legendary cult Manchester band beloved of music fans of (ahem) a certain vintage, The Smiths seemed to release a t-shirt for every record release and the artwork was just as challenging and inspired as their music. Each featured a different ‘cover star’ – from French actor Alan Delon to Diana Dors, Elvis, and James Dean! My favourite ‘Meat Is Murder’ features a still – from Emile de Antonio’s brilliant Vietnam War doc, In The Year Of The Pig – of Marine Cpl Michael Wynn. Wynn’s helmet was originally scrawled with the message ‘Make War Not Love’, but The Smiths changed the slogan to match the title of their album.

So there are a few of my suggestions. I didn’t have room for favs by The Clash, Sonic Youth, or The Pixies – maybe next time. In the meantime, I’m sure you have suggestions of your own – why not get in touch to let us know yours.

I’ve also put together a playlist of favourite tracks by the bands featured – which can be found here.

Get in touch
Back

#LockdownLearnings – What have we been up to?